« Back to all events

Alongside our own programme of events TEG enjoys participating at other events around the UK and internationally. If you would like TEG to participate in your event please email: seminars@teg.org.uk

Please check back here to see future events where TEG will be present.

We attended the MA Exhibition in Belfast, 8th-9th November 2018, in the Networks Hub.

TEG to present a paper at the European Registrar’s Conference 2018 (ERC18), London

TEG’s Professional Development Manager, Charlotte Dew, presented ‘A proposal for removing barriers to lending and borrowing’, based on the organisation’s work with Arts Council England (ACE), the National Museums Director’s Council (NMDC) and Art Fund on the Preparing to Borrow programme, since April 2017, at the ERC 18, on 18th November 2018.

The paper was part of the Refresh conference stream. Using the findings from TEG’s ‘Lending and Borrowing Experiences Report’ (Dew:2017) as a starting point, it outlines the barriers, and how through a framework of training, mentoring and small procedural changes these may be removed, resulting in fruitful partnerships, benefiting participating institutions, as well as the public through the resulting exhibitions. It argues that change of this nature is only possible when organisations are open to collaboration; that borrowing activity should be considered a partnership, not a transactional activity.

We launched the TEG Lending and Borrowing Experiences Report on Thursday 16th November. Thank you to everyone who joined us in Manchester.

TEG presented details of exhibitions available to tour internationally at the MUSCON Conference 2017 in Helsinki, from the 20-23 September 2017, on behalf of TEG members Art Works for Change, House of Illustration and People Dancing.

TEG participated in the Museums + Heritage Show talks programme on the 17 May, Design Theatre, Kensington Olympia:

Sharing Collections: The Benefits and Challenges of Borrowing

Borrowing and lending between museums of different scales and types is an important two-way opportunity to share objects and expertise, and increase opportunities for public engagement. This session will present the results of the Touring Exhibition Group’s (TEG) ACE-funded research into borrowing practices, together with case studies and recommendations for good practice as a lender and borrower. It will also introduce the TEG and National Museum Directors Council’s Preparing to Borrow programme of training, mentoring and match-making.

Our reception at the 2016 Museum’s Association Conference was very well attended and we would like to thank all of you who made it. For those who didn’t, you can see our presentation. Download MA Conference 2016 presentation

Muscon is a working platform focused on co-producing and travelling exhibitions. TEG attended the 2016 event in Vienna to promote a range of TEG members? exhibitions, available to tour internationally. See our MUSCON 2016 leaflet.

In May 2016 TEG Researcher Charlotte Dew, attended this annual meeting in Washington DC, with support from ICOM UK. In her subsequent report she reflects on the similarities and differences between the UK and USA domestic touring markets and what UK organisations can learn from the approach taken in the UK. Download TEG USA report. 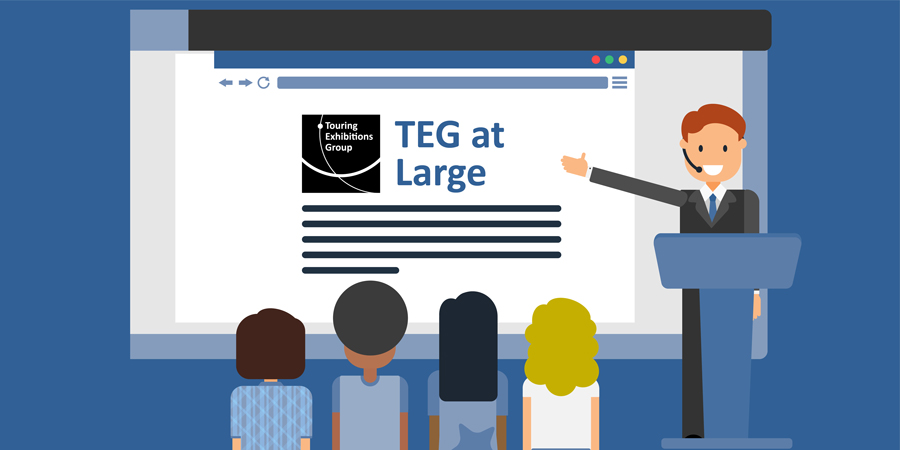